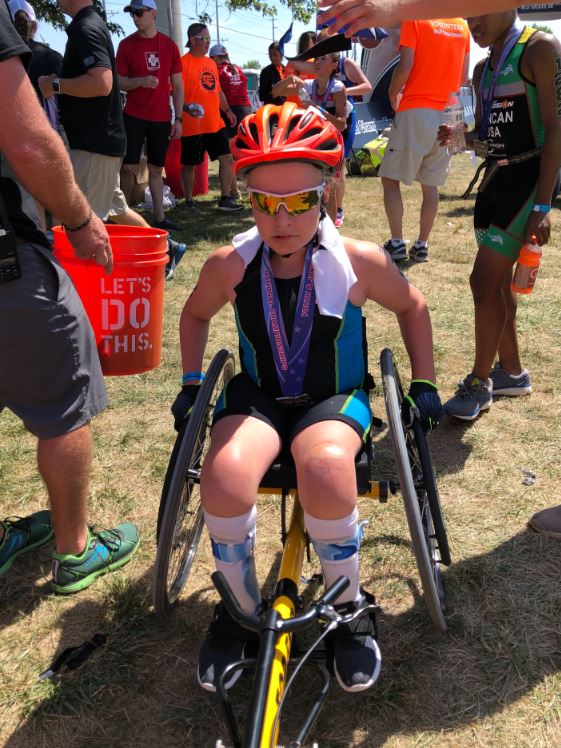 Competing in a triathlon can be too daunting a task for even the most motivated athletes. However, a team of three inspiring young women will compete in the duathlon at the Salem Rotary Multi-Sport Riverfest on Sept. 15. The experienced para-athletes will complete the running/biking/running event.

Salem’s Emmy Pfankuch will lead the run in a track racing (wheeled) chair. Hadassah Benson, a visually impaired senior from Wilsonville high school, will complete the bicycle leg of the race on a tandem bike. Kayla Bolnick, a Clackamas Community College freshman, will complete the final portion of the race also using a track racing chair. The team was assembled by Emmy and her mother, Jill Pfankuch.

Thirteen-year-old Emmy is not like most teens. In fact, despite being born with spina bifida and using a wheelchair, she has completed over ten triathlons, though many courses did not have proper accommodations for para-athletes. This included, at times, racing uphill on grass.

Her path to competition was inspired by her parents; both triathletes. Sadly, her father passed away in 2015 and her mother, Jill, developed serious health problems. After competing in several triathlons, in 2013, Jill was diagnosed with cancer and had to have half of her left lung removed.

“I was told I would not be able to compete after I had surgery,” she said. “[The doctors] said my lung capacity would be too diminished. I wouldn’t be able to endure a triathlon.”

However, Jill, like her daughter Emmy, was stubborn and refused to be told she couldn’t do something. She continued training after her surgery and eventually completed an Olympic distance triathlon. Because of the intensive training, her lung capacity returned to 100% normal, even though she was missing a significant portion of it.

Inspired by her mom’s tenacity, Emmy decided she wanted to compete as well, and made it her goal to join the local swim team. She saved up and paid for swimming lessons with her own birthday and Christmas money. She learned how to swim at the West Salem Courthouse, and eventually made the Battlecreek Courthouse swim team.

“I wanted to show everyone that even though I was paralyzed, that I could actually swim instead of sitting around and doing nothing,” said Emmy.

Emmy, along with her friends and mother, is an incredible example of the powers of perseverance and self-belief. Come out to Salem’s Riverfront Park to watch her race on September 15.